During the revolutionary era, cheap prints depicting current events were in demand in both England and the colonies. This 1775 British print presented a scene in Edenton, North Carolina, where fifty-one women had signed a declaration in support of nonimportation, swearing not to drink tea or purchase British imports. Boycotts of British goods were a widespread form of protest against the Townshend Duties, enacted by the British in 1767 to tax imported goods such as paint, paper, lead, glass, and tea. Abstaining from European products and fashions became a mark of patriotism, and merchants who violated nonimportation were subjected to public ridicule. Tarring and feathering was common, as were attacks on conspicuous symbols of wealth. As this print suggests, ridicule existed on both sides of the Atlantic. 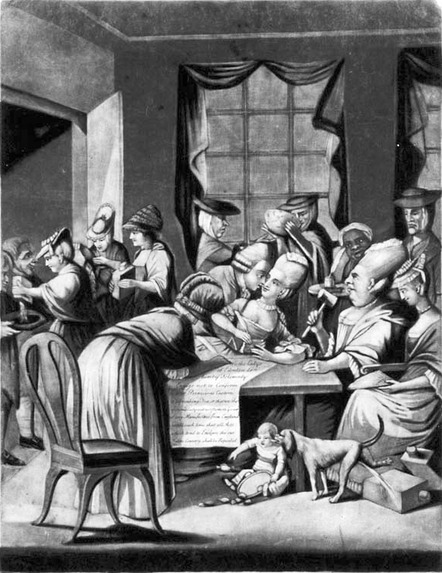