The Bostonians Paying the Excise-Man, or Tarring & Feathering

This 1774 British print, titled "The Bostonians Paying the Excise-Man, or Tarring and Feathering," depicts the attack of a Patriot crowd on Boston Commissioner of Customs John Malcolm. Tarring and feathering was a ritual of humiliation and public warning that stopped just short of serious injury. Victims included British officials such as Malcolm and local merchants who violated non-importation boycotts of British goods. In this print, several Patriots (including a leather-aproned artisan) attacked Malcom under Boston's Liberty Tree (a symbol of resistance to British rule), while the Boston Tea Party occurred in the background. (In fact, the attack on Malcolm took place four weeks after the Tea Party.) 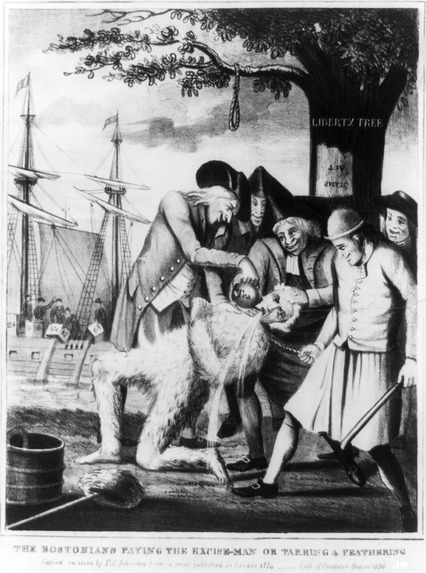 "An American Woman" Lends her Support to the Revolutionary War