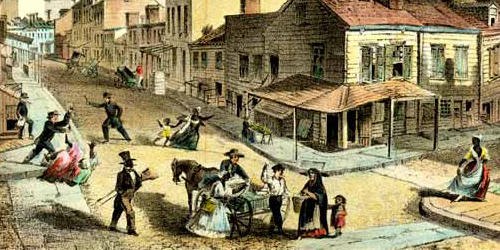 During the mid-nineteenth century, well over a million Irish fled their native country for the United States. Those who settled in New York City overwhelmingly lived in the Five Points, a neighborhood that achieved international notoriety as an overcrowded, dangerous, and disease-ridden slum. But the Five Points was more than that. The immigrants who lived there provided the labor that fueled the city’s emerging industrial order. They established a foothold in politics through Tammany Hall, the city’s Democratic machine. And the Five Points boasted a vibrant culture that attracted New Yorkers from all parts of the city.

The materials and teaching activities in this collection will give you multiple perspectives on the Five Points and the people who lived there. The collection utilizes letters, censuses, and bank records, among many primary sources, to paint a picture of life in the Five Points. In addition, ASHP’s documentary film Five Points: New York’s Irish Working Class in the 1850s provides rich visual images of the neighborhood and puts students in the shoes of the Mulvahills, an ordinary working-class family who made its home in America’s most famous slum.