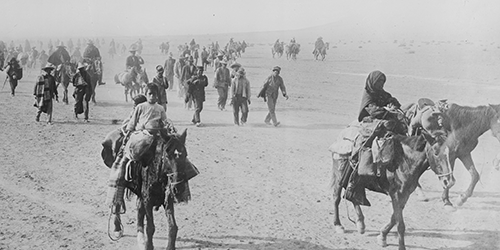 Between 1900 and 1930, political turmoil in Mexico combined with the rise of agribusiness in the American Southwest to prompt a large-scale migration of Mexicans to the U.S. There were reasons on both sides of the border. Transformations in the Mexican economy under President Porfirio Díaz left many peasants landless and desperate; when he was overthrown in 1911, ten percent of Mexico’s population departed for the U.S. There they found work in mining and agribusiness, which were transforming the economy of the Southwest from a region of small, entrepreneurial landholders into one dominated by large enterprises employing wage labor.

The documents in this collection explore the social, political, and economic dimensions of the first mass migration of Mexicans to the United States. Migrants found themselves in a strange position—desired as workers by large business concerns but facing intense legal, political, and social discrimination. The collection offers multiple perspectives on the phenomenon of Mexican migration, including the accounts of scholars, journalists, employers, and migrants themselves.