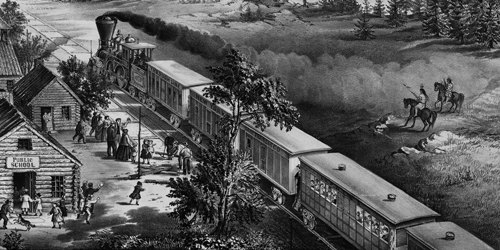 Railroad construction in the U.S. boomed after the Civil War. Railroads altered the rhythm and tenor of American life, making it possible to move people and goods over vast distances at unheard-of speeds. They promoted industrial growth and helped foster a national identity. But they also brought conflict, as the benefits of the railroad were distributed unevenly across class and racial lines.

The documents in this collection illustrate how ordinary Americans from various backgrounds experienced and understood the growth of railroads. Teaching activities put students in the shoes of workers who built the railroads and Native Americans displaced by it. ASHP’s thirty-minute documentary 1877: The Grand Army of Starvation depicts the massive strike of that year by railroad workers that paralyzed railroads across the country and sought to curb the enormous power of the railroad corporations.