During the spring of 1919, a group of anarchists (known as Galleanists because they were followers of Italian anarchist Luigi Galleani) sent a series of mail bombs to U.S. government officials and judges. On June 2, 1919, one of these bombs exploded at the home of Attorney General A. Mitchell Palmer, and he and his family barely escaped death. Later that year, Palmer launched a series of police actions that became known as the Palmer Raids. Federal agents supported by local police rounded up large groups of suspected radicals, often based on membership in a political group rather than any action taken. Thousands were arrested and hundreds deported. 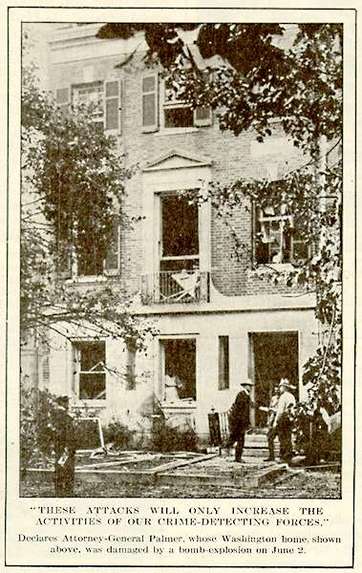 These attacks will only increase the activities of our crime-detecting forces," declares Attorney-General Palmer, whose Washington home, shown above, was damaged by a bomb-explosion on June 2.