After World War I a "Red Scare" broke out as anxieties about political extremists and radicals led to widespread demonization and political persecution of leftists and immigrants. A series of high-profile events from the late-nineteenth century on, such as the Haymarket Square bombing and the assassination of President McKinley by Leon Czolgosz, had cemented the connection of radical politics and violence in the public mind, with the image of the "anarchist" in particular becoming synonymous with the bomb-throwing terrorist. Since many of the leading exponents of anarchism, as well the defendants in the notorious Sacco and Vanzetti case and President McKinley's assassin were Italian, Russian, or Eastern European, these groups in particular were stigmatized as the stereotypical "anarchists," bent on violent revolution and the destruction of America's institutions. This stereotype, suggested by the bomb-wielding, dark-featured "European Anarchist" of the cartoon, became a leading justification for the passage of quota laws which severely limited immigration from Italy, Russia, and other regions of Southern and Eastern Europe. 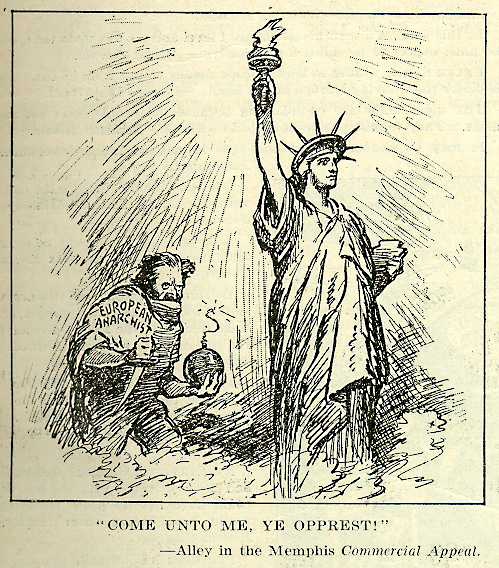