In the years after World War I, American workers sought to consolidate and expand the gains they had achieved during the war years. In September 1919, some 350,000 steelworkers went on strike, seeking higher wages, shorter hours and better working conditions. Steel companies, often with assistance of local governments, responded with violent tactics, eventually employing African Americans and Mexican Americans as strikebreakers. The strike eventually went down to defeat, with steel companies playing both on the racism of the workers and the public's aversion to the fact that many of the strikers were immigrants from Southern and Eastern Europe. This ballot, printed in English, Croatian, Hungarian, Italian, Slovak, and Polish and distributed by the National Committee for Organizing Iron and Steel Workers, reflects the broad range of nationalities comprising the industry's workforce. 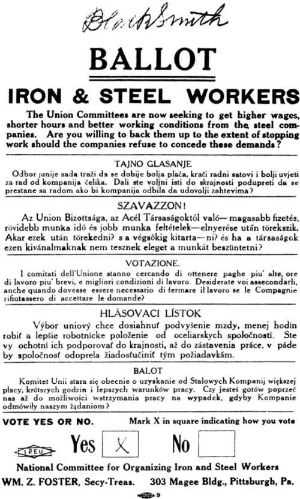