"As it was in the old days"

Edward Curtis was a professional photographer of the American West. In 1906, the wealthy banker and art collector J.P. Morgan hired Curtis to produce a multi-volume series on Native Americans that would include essays, sound recordings, and 1500 photographs. The goal of the series was not simply to photograph Indians, but to document "one of the great races of mankind" before their way of life disappeared for good. 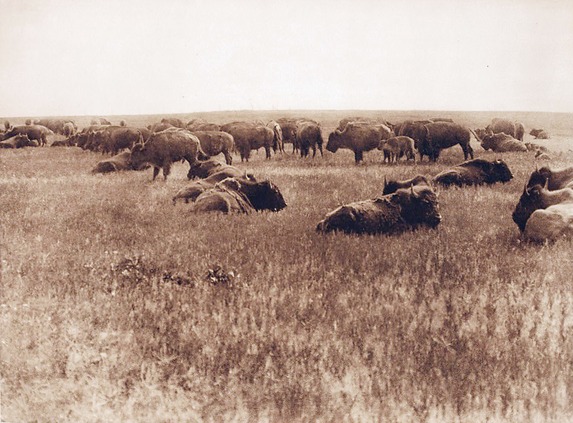 In early days, before white men invaded the Great Plains and ruthlessly slaughtered them by the hundreds of thousands, bison were of prime importance to the hunting tribes of the vast region in which those animals had their range. The bison was not only the chief source of food of the Plains Indians, but its skin was made into clothing, shields, packs, bags, snowshoes, and tent and boat covers; the horns were fashioned into spoons and drinking vessels; the sinew was woven into reatas, belts, personal ornaments, and the covers of sacred bundles; and the dried droppings, "buffalo chips," were used as fuel. So dependent on the buffalo were these Indians that it became sacred to them, and many were the ceremonies performed for the purpose of promoting the increase of the herds.

Background Information on the Events at Wounded Knee

An Early Expedition Describes a Peaceful Encounter with the Carolina Algonquians

An Early Colonist Describes the Indian Town of Secota