In 1896 Congress passed a bill which would require all immigrants to be able to read at least 40 words in any language in order to enter the country. The bill was supported by the Immigration Restriction League. They worried that the increasing number of immigrants from Italy and Eastern Europe would drive down wages and not be able to become useful members of American society. As part of its campaign to get the literacy requirement bill passed, the League sent out the petition below to many unions and civic organizations as a way to pressure Congress to pass the bill. President Grover Cleveland, however, disagreed with Congress and vetoed the bill. 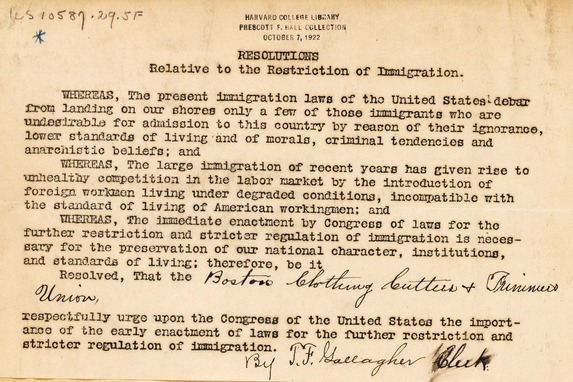 WHEREAS, The present immigration laws of the United States debar from landing on our shores only a few of those immigrants who are undesirable for admission to this country by reason of their ignorance, lower standards of living and of morals, criminal tendencies and anarchistic beliefs; and

WHEREAS, The large immigration of recent years have given rise to unhealthy competition in the labor market by the introduction of foreign workmen living under degraded conditions, incompatible with the standard of living of American workingmen; and

WHEREAS, The immediate enactment by Congress of laws for the further restriction and stricter regulation of immigration is necessary for the preservation of our national character, institutions, and standards of living; therefore, be it

respectfully urge upon the Congress of the United States the importance of the early enactment of laws for the further restriction and stricter regulation of immigration.