Stereographic photographs were common souvenirs sold at the World’s Fairs. At the 1904 St. Louis World’s Fair, the Philippine village attracted hundreds of thousands of visitors. The U.S. government’s Bureau of Insular Affairs, which oversaw the governing of the Philippines, sponsored the Philippine Reservation as the exhibit was officially called. The Igorotte village was one of several indigenous “villages” along side model schools, industrial and agricultural exhibits, and military displays that were designed to introduce the Philippine Islands and islanders to the U.S. public. The men in this portrait would perform traditional dances for visitors. 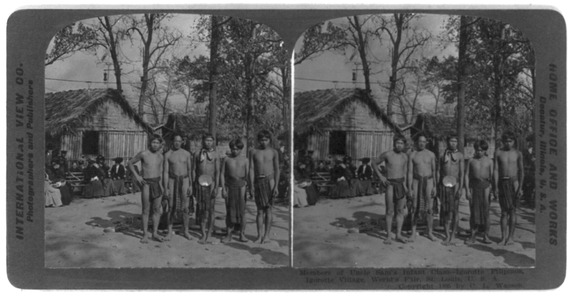