During the colonial period, colonists imported most of their manufactured goods. In 1767, the British government passed laws that required American colonists to pay taxes on imported goods from England. Many colonists responded by forming non-importation agreements, refusing to buy imported goods and urging other colonists to do the same. For women, who could not vote or hold office, non-importation campaigns were a way to participate in colonial politics. Many of them publicly gave up drinking tea and began spinning their own yarn, to avoid buying cloth imported from Britain. Some spelling changes and edits have been made to improve clarity. 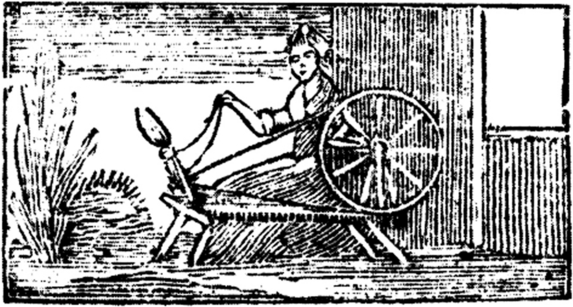 On the 12 of July...true Daughters of Liberty & Industry, stimulated by their fair Sisters, met at the House of Rev. Mr. Forbes, to the number of Fifty-five, with Thirty four Wheels; and from 5 o'Clock in the Morning, to 7 in the Evening picked, carded, and spun [a large amount] of Cotton Wool...and of Flax...The next Day, and for several succeeding Days; others as well affected [by]...the Cause of Liberty and Industry, but [who] could not leave their Families to join their Sisters on the Said Day, sent in their [yarn] spun out of their own Materials.

July 16. --- Newport. July 10. We can assure the Public, that Spinning is so much encouraged among us, that a Lady in Town, who is in very affluent Circumstances, and who is between 70 and 80 years of Age, has within about three Weeks become a very good Spinner, though she never spun a Thread in her Life before. Thus has the Love of Liberty and dread of Tyranny, kindled in the Breast of old and young, a glorious Flame, which will eminently distinguish the fair Sex of the present Time through far distant Ages.

A Revolutionary Veteran Describes His Experience (with text supports)

Sarah Osborn Recalls Her Experiences in the Revolutionary War

A White Woman Describes the American Revolution from a Seneca Perspective

A Shoemaker Describes His Role in the Boston Tea Party