A Harper’s Weekly engraving shows some of the grim results of a terrorist attack on the African-American citizens of the rural town of Colfax, Louisiana, in April 1873. Starting in 1871, the Democratic party in several southern states began an organized campaign of intimidation to unseat Republicans from state governments. They drove whites out of the Republican party through race-baiting, economic pressure, and threats of violence and intimidated African-American Republicans through violence and economic coercion. In Colfax, freedmen who feared Democrats would seize the county government blockaded the town and held it for three weeks until they were overpowered the White League, a paramilitary group that targeted black and white Republicans throughout Louisiana. Seventy African Americans and two whites were murdered in Colfax; most of the murdered African Americans had already surrendered when they were killed. The massacre in Colfax was one of hundreds of such attacks on black voters, politicians, schools and farms during the Reconstruction era. 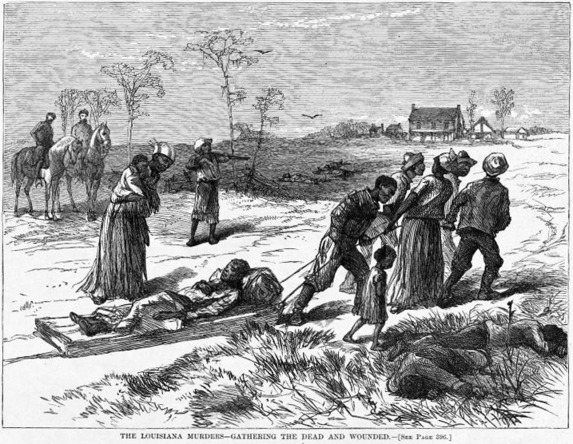 The Louisiana Murders--Gathering the Dead and Wounded

Create a Magic Lantern Show: Freedpeople in the Reconstruction South