The scale of the United States' war production effort during World War II touched every corner of the nation and millions of people. When traditional farm workers left for military service or higher paying jobs in war industries, the U.S. government looked south to Mexico. Several thousands braceros were invited to work in the United States, primarily in agriculture. This photograph of braceros in Texas cotton country, though, shows that in some places African Americans (especially men who were too young to join the army) worked alongside Mexican laborers. A bracero later recalled that harvesting cotton was the hardest work of all; one bracero corridista sang, "But I too came to pick cotton / and they have to pay me / for each hundred pounds a dollar / You can see I am quite skinny / From lack of food to eat." 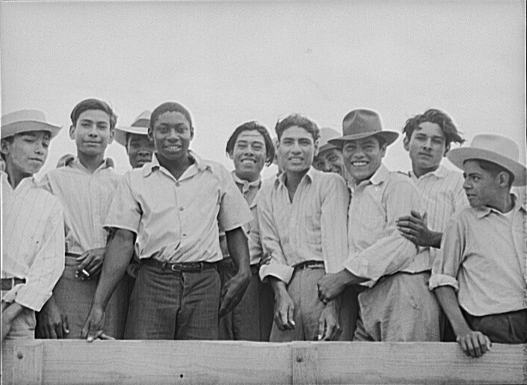