Black Workers Call for a March on Washington

In May 1941, as it became clear that the U.S. would probably be entering World War II, black labor leader A. Philip Randolph and other activists founded the March on Washington Movement (MOWM). They called for a mass march on the nation's capital to protest job discrimination in government financed jobs and segregation in the military. On June 24, 1941, President Franklin Roosevelt issued Executive Order 8802, which banned racial discrimination in government employment, defense industries, and training programs. MOWM leaders called off the march, though they continued to organize other civil rights campaigns. Activists' vision of a mass march on Washington was eventually realized at the August 1963 March on Washington for Jobs and Freedom, which drew over 250,000 people. 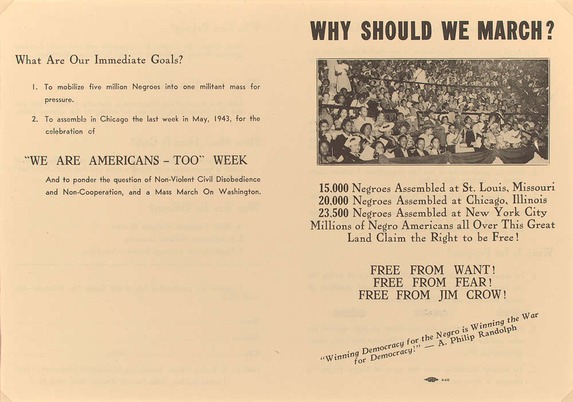 Dear fellow Negro Americans, be not dismayed by these terrible times. You possess power, great power. Our problem is to harness and hitch it up for action on the broadest, daring and most gigantic scale.

In this period of power politics, nothing counts but pressure, more pressure, and still more pressure, through the tactic and strategy of broad, organized, aggressive mass action behind the vital and important issues of the Negro. To this end, we propose that ten thousand Negroes MARCH ON WASHINGTON FOR JOBS IN NATIONAL DEFENSE AND EQUAL INTEGRATION IN THE FIGHTING FORCES OF THE UNITED STATES.

An "all-out" thundering march on Washington, ending in a monster and huge demonstration at Lincoln's Monument will shake up white America.

It will shake up official Washington.

It will give encouragement to our white friends to fight all the harder by our side, with us, for our righteous cause.

It will gain respect for the Negro people.

It will create a new sense of self-respect among Negroes.

But what of national unity?

We believe in national unity which recognizes equal opportunity of black and white citizens to jobs in national defense and the armed forces, and in all other institutions and endeavors in America. We condemn all dictatorships, Fascist, Nazi and Communist. We are loyal, patriotic Americans all.

Today we call on President Roosevelt, a great humanitarian and idealist, to . . . free American Negro citizens of the stigma, humiliation and insult of discrimination and Jim-Crowism in Government departments and national defense.

The Federal Government cannot with clear conscience call upon private industry and labor unions to abolish discrimination based on race and color as long as it practices discrimination itself against Negro Americans.

Black Workers Call for a March on Washington Worksheet

Background Essay on the March on Washington Movement

Black Workers Call for a March on Washington Worksheet