In his 1941 State of the Union address to Congress, President Franklin Roosevelt identified "four freedoms" (freedom from want, freedom from fear, freedom of speech, and freedom to practice religion) that the U.S. needed to defend by entering into World War II. For African Americans, the desire to support the war effort was coupled with a need to fight for racial equality. Beginning in early 1942, the Pittsburgh Courier, a nationally read black newspaper, launched a "Double V" campaign demanding that black soldiers who were risking their lives abroad receive full citizenship at home. The paper designed a recognizable Double V logo to promote the campaign via posters and buttons and ran photographs of people supporting the campaign. The Courier also printed editorials and numerous letters from readers about the need for racial equality. 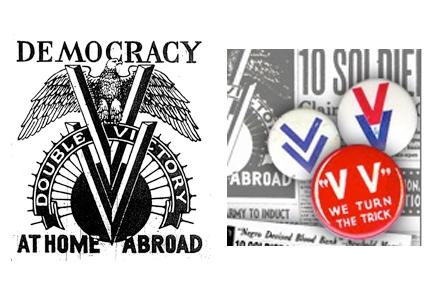 Every thoughtful American realizes that the independence of this nation depends upon victory for our armies against the forces of totalitarianism abroad on a dozen fronts.

It is widely understood that at home democracy may perish unless every one of us is unusually vigilant.

If we are to have no democracy at home, it does not make a great deal of difference what happens abroad.

Victory for democracy abroad means beating the armies of Hitler, Mussolini, and The Mikado.

Victory for democracy at home means beating disfranchisement, racial pollution laws, residential segregation, economic discrimination based on color, jim-crowism, social and educational inequalities, and all efforts to curtail or abolish the safeguards of the Bill of Rights.

A Double V pin indicates allegiance to these high ideals for which great men have fought and died through the centuries that we might have a measure of freedom today.