In 1765 the British Parliament, in an attempt to increase revenue from the colonies to pay for troops and colonial administration, passed the Stamp Act. It required colonists to purchase stamps for many documents and printed items, such as land titles, contracts, playing cards, books, newspapers, and advertisements. Because it affected almost everyone, the act provoked widespread hostility. Newspapers were a common form of communication in this period, and even illiterate colonists might hear a newspaper read aloud in a tavern. 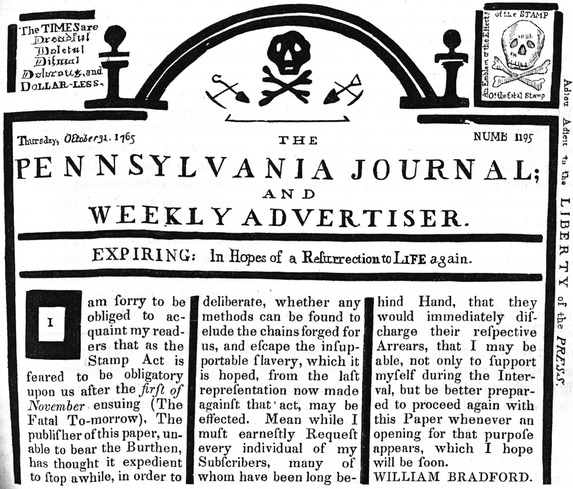 The TIMES are An Emblem of the Effects of the STAMP

The PENNSYLVANIA JOURNAL; AND WEEKLY ADVERTISER
EXPIRING: In Hopes of a Resurrection to LIFE again

I am sorry to be obliged to acquaint my readers that as the Stamp Act is feared to be obligatory upon us after the first of November ensuing (The Fatal To-Morrow), The publisher of this paper, unable to bear the Burden, has thought it expedient to stop awhile, in order to deliberate, whether any methods can be found to elude the chains forged for us, and escape the insupportable slavery, which it is hoped, from the last representation now made against that act, may be effected. Mean while I must, earnestly Request every individual of my Subscribers, many of whom have been long behind Hand, that they would immediate discharge their respective Arrears, that I may be able, not only to support myself during the Interval, but be better prepared to proceed again with this Paper whenever an opening for that purpose appears, which I hope will be soon. WILLIAM BRADFORD