These extracts from the report of the Commissioner-General of Immigration were reprinted and circulated by the Immigration Restriction League, a Boston-based organization that favored stronger restrictions on immigration at the turn of the twentieth century. In it the Commissioner-General echoes the sentiments of many anti-immigration efforts of the time, noting the prevalence of immigration from Italy and Eastern Europe (although denying any ethnic prejudice against these groups), their concentration in eastern cities, and characterizing them as undesirable. 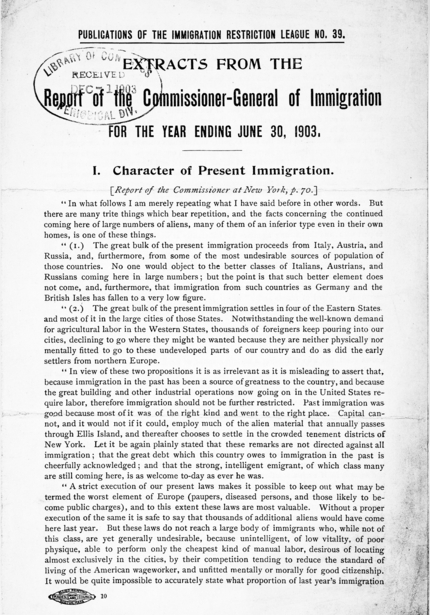 The great bulk of the present immigration proceeds from Italy, Austria, and Russia, and, furthermore, from some of the most undesirable sources of population of those countries. No one would object to the better class of Italians, Austrians, and Russians coming here in large numbers; but the point is that such better element does not come, and, furthermore, that immigration from such countries as Germany and the British Isles has fallen to a very low figure.

The great bulk of the present immigration settles in four of the Eastern States and most of it in the large cities of those States. Notwithstanding the well-known demand for agricultural labor in the Western States, thousands of foreigners keep pouring into our cities, declining to go where they might be wanted because they are neither physically or mentally fitted to go to these undeveloped parts of our country and do as did the early settlers from northern Europe.

...Past immigration was good because most of it was of the right kind and went to the right place. Capital cannot, and it would not if it could, employ much of the alien material that annually passes through Ellis Island, and thereafter chooses to settle in the crowded tenement districts of New York.

...A strict execution of our present laws makes it possible to keep out what may be termed the worst element of Europe (paupers, diseased persons, and those likely to become public charges), and to this extent these laws are most valuable….But these laws do not reach a large body of immigrants, who, while not of this class, are yet generally undesirable, because unintelligent, of low vitality, of poor physique, able to perform only the cheapest kind of manual labor, desirous of locating almost exclusively in the cities, by their competition tending to reduce the standard of living of the American wageworker, and unfitted mentally or morally for good citizenship.