"Supporters of the Grape Boycott March through Toronto"

In 1965, Mexican and Filipino farmworkers joined together as the United Farm Workers of America (UFWA) to strike against poor working conditions and low wages in California's grape industry. Months on the picket line, however, took their toll, and the threat of violence grew. Under the leadership of César Chavez and Dolores Huerta, in 1967 UFWA sought to increase pressure on the growers by launching an ambitious consumer boycott of grapes grown in California. The boycott spread throughout the United States and into Canada, with student activists, civil rights groups, and eventually over 14 million supporters refusing to buy grapes in order to show support for the striking workers. By 1970, grape growers agreed to sign union contracts. 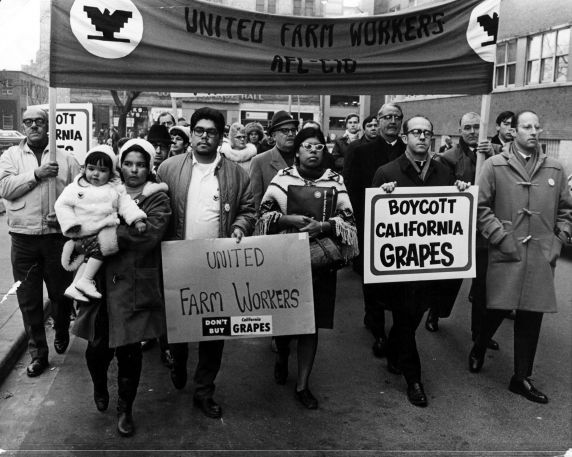 Supporters of the Grape Boycott demonstrate in Toronto, Ontario, December, 1968. Jessica Govea is in the center, front row (wearing poncho).