Waiting for the Reduction of the Army

A massive labor strike in 1877 shook the very foundations of American politics and society. Starting with a spontaneous railroad strike in West Virginia, the “Great Uprising” spread rapidly across the country. In many cities, entire working populations went out on strike. When state and federal troops fired on workers in several cities, the official violence galvanized workers across the country and those who sympathized with them. As this 1878 cartoon from the New York Daily Graphic indicates, in the aftermath of the strike, the press increasingly grouped together Indians, trade unionists, immigrants, and tramps as symbols of disorder and opposition to the nation’s progress. 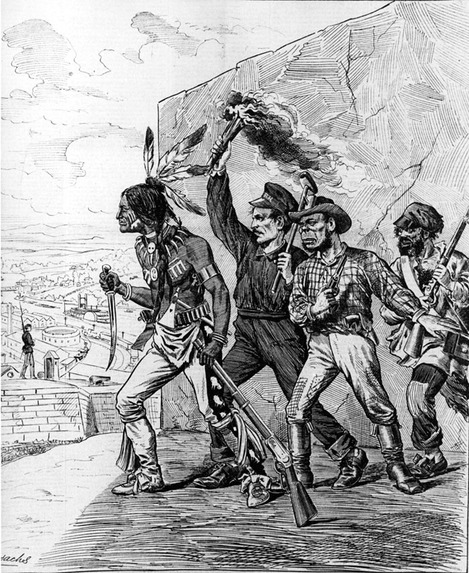 An African-American Socialist Lends His Support to Railroad Strikers

1877: The Grand Army of Starvation Script
(for chapters on "The Centennial Exposition" and "The Railroad")

1877: The Grand Army of Starvation Vocabulary (for chapters on "The Centennial Exposition" and "The Railroad")