During the 1870s and 1880s, hundreds of petitions bearing the signatures of thousands of people flooded Congress, asking for a suffrage amendment. Local activists went door-to-door in their communities, gathering the signatures of sympathetic women and men. These Massachusetts activists followed a template circulated by Susan B. Anthony and Elizabeth Cady Stanton; the template provided the proper wording for a petition and suggested that there be separate places for the signatures of men (who could vote) and women (who could not). Suffrage leaders compared their methods to similar anti-slavery petition drives, also led by women, in the antebellum period. 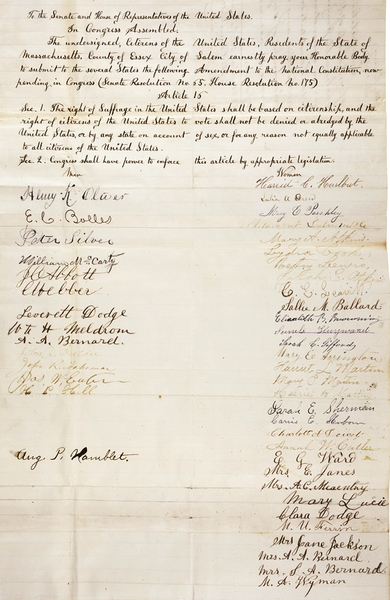 To the Senate and House of Representatives of the United States.

The undersigned, citizens of the United States, Residents of the State of Massachusetts, County of Essex, City of Salem, earnestly pray your Honorable Body to submit to the several States the following Amendment to the National Constitution, now pending in Congress (Senate Resolution No. 55, House Resolution No. 175)

Sec. 2. Congress shall have the power to enforce this article by appropriate legislation.

Analysis Worksheet: Petition from the Citizens of Massachusetts in Support of Women's Suffrage