Led by the self-styled “best men” of the South—planters, generals, lawyers and doctors—terrorist organizations like the White League and the Ku Klux Klan and paramilitary groups organized with the Democratic Party, led a campaign of violence and intimidation against freedmen and their white allies. Their targets were not just the schools, churches and political organizations established by former slaves, but also the people themselves, especially those who were politically active or worked to educate others. This list, compiled by the Freedmen’s Bureau, documents murders and assaults in Georgia between January 1st and October 31st, 1868. These records are from lists that record 62 separate incidents from ten Georgia counties over the course of 10 months. 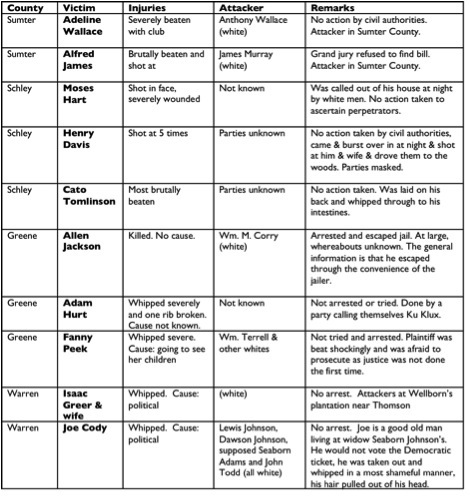