This photograph was published in a report chronicling the intimidation and violence towards African-American voting activists. As the original photo caption notes, police documented voters as they entered courthouses so that the "evidence" could later be used to identify them to employers and landlords for possible firing and eviction. The report was most likely published and distributed by SNCC, though it was based on research that was originally compiled and entered into the United States Congressional Record in 1963. 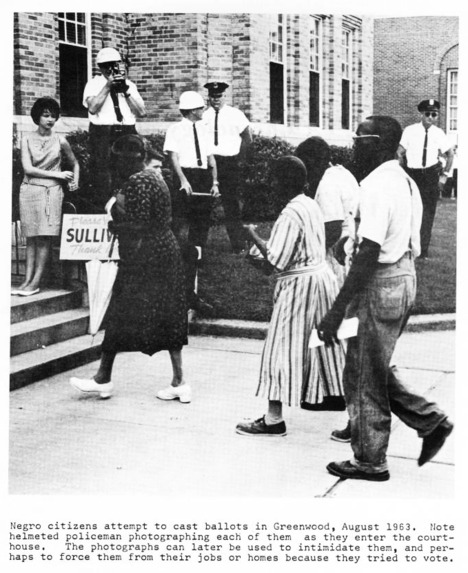 Negro citizens attempt to cast ballots in Greenwood, August 1963. Note helmeted policemen photographing each of them as they enter the courthouse. The photographs can later be used to intimidate them, and perhaps to force them from their jobs or homes because they tried to vote.

Prospectus for a Summer Freedom School Program in Mississippi (Excerpt)

Chart of Votes for Freedom Candidates in Official Elections