The campaign to abolish the Atlantic slave trade first emerged during the 1780s in Great Britain. Although slavery was not widespread in Britain, its merchants had long dominated the trade and helped to promote slavery throughout European colonies in the Americas and Caribbean. In 1787, abolitionist Thomas Clarkson joined with a group of English Quakers to launch a parliamentary investigation into the horrors of human trafficking. Clarkson conducted extensive research on the slave trade by touring British slave ports, interviewing crew, and collecting equipment from slave ships such as handcuffs, shackles, and branding irons. This famous diagram and description of the Liverpool-based slave ship, Brookes, shows the number and placement of Africans in the ship's hold, contrary to the legal regulations of the slave trade. The layout, based on Clarkson's information, was given as evidence during British Parliamentary hearings. 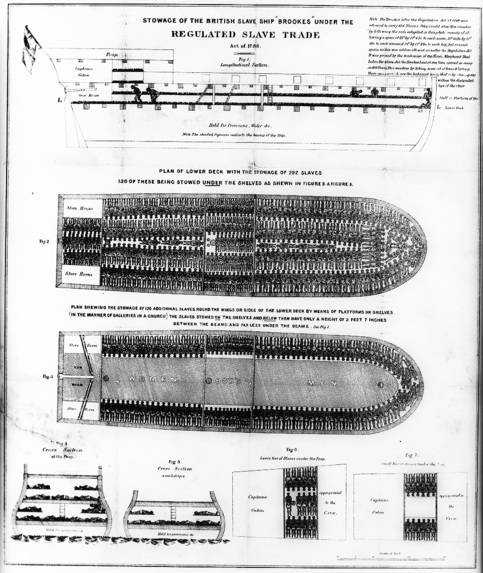 Note: The "Brookes" after the Regulation Act of 1788, was allowed to carry 454 Slaves, She could stow this number by following the rule adopted in this plate. Namely of allowing a space of 6 ft. by 1 ft. 4 in. to each man; 5 ft. 10 in. by 1 ft. 4 in. to each woman, & 5 ft. by 1 ft. 2 in. to each boy, but so much space as this was seldom allowed even after the Regulation Act. It was proved by the confession of the Slave Merchant that before the above Act the Brookes had at one time carried as many as 609 Slaves. This was done by taking some out of Irons & locking them spoonwise (to use the technical term) that is by stowing one within the distended legs of the other.

Fig. 2: Plan of lower deck with the stowage of 292 slaves, 130 of these being stowed under the shelves as shewn in figure B & Figure 3.

Fig. 3: Plan shewing the stowage of 130 additional slaves round the wings or sides of the lower deck by means of platforms or shelves (in the manner of galleries in a church) the slaves stowed on the shelves and below them have only a height of 2 feet 7 inches between the beams and far less under the beams. See fig. 1.

Fig. 4: Cross section at the poop.

Fig. 6 Lower tier of slaves under the poop.

Fig. 7: Shelf tier of slaves under the poop.

A Slave Ship Captain Negotiates with an African Ruler

Chart of the Voyages of the Slave Ship Brookes

Many Passages: The Voyage of the Slave Ship Brookes