The event known as Nat Turner's Rebellion was the largest slave uprising in the antebellum South. Beginning in the early morning hours of August 21, 1831, Turner, a literate slave who claimed to be guided by religious visions, led a group of slaves in a series of attacks in Southampton County, Virginia. Over the course of two days, they killed approximately 60 white men, women, and children. This woodcut depicts the murder of Turner's owner, Joseph Travis (#2), as well as a nameless mother and children (#1), and a "Mr. Barrow" (#3), shown resisting the attack. The bottom panel (#4) shows a company of soldiers in pursuit of the rebels. In the rebellion's aftermath, Turner and his co-conspirators were captured, tried, and executed, and hundreds of other local slaves were punished or killed by panicked whites. This woodcut, originally captioned "Horrid Massacre in Virginia," was published in an 1831 account of the uprising. 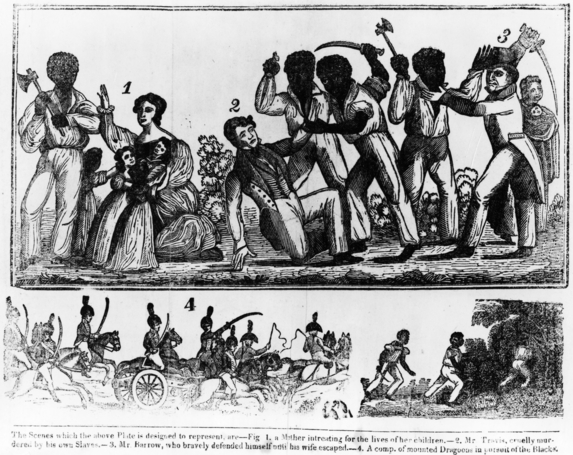