This ink-and-wash drawing depicts Lincoln's dramatic entry into Richmond, Virginia on April 4, 1865, only a day after it had fallen to Union troops in the last major battle of the Civil War. The President and his son Tad made the short journey from Washington, D.C. to the former Confederate capital to tour the ruins and celebrate victory. Although they were formally escorted by twelve U.S. sailors, an eyewitness observed that in his two-mile walk around the city, Lincoln hardly saw his guards because he was "directed by negroes." Lincoln's enthusiastic reception by newly freed slaves represented the culmination of his gradual shift of the war's aims, a process made official when he issued the Emancipation Proclamation. 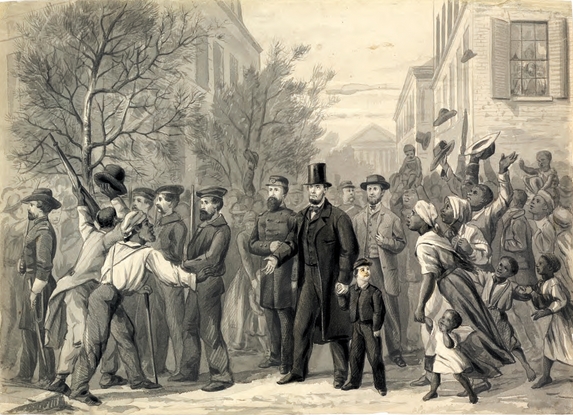