American college students in the early 1930s increasingly protested U.S. involvement in the war in Europe. They organized campus strikes around the nation and encouraged students to pledge non-cooperation in any war. This flyer is from the National Committee for the Student Congress Against War, for a program held at the University of Chicago on December 27, 1932. The document ofers a representative example of some of the major war-related issues that concerned college students: imperialism, colonialism, war profiteering, and human rights. 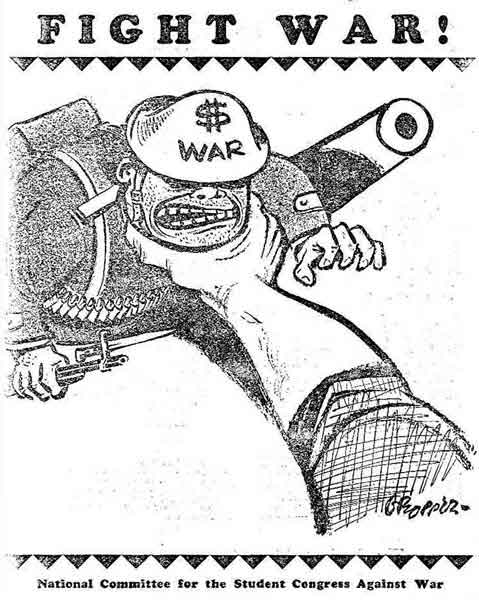 Students, Give Us Your Answer!

WHAT WILL YOU BE DOING IN THE NEXT WAR? Will you, too, serve as a lever in the destructive war machine?

IF YOU ARE A STUDENT IN THE R.O.T.C., YOU CANNOT IGNORE THIS QUESTION. Because the War Department is now preparing you for the dying and killing of the next war. You cannot point to the standing army and say, "they will bear the burden, the problem of war is theirs." No. Plans have already been made that the chief role in war be played by you, the student of R. O. T. C. In the "Herald Tribune" of February 16, 1930 is outlined the "New Mobilization Plan" which enables the U. S. to muster an army of 4,000,000 men in ten months. Reserve officers will constitute the foundation of this army. And there is no mistaking the source from which they will be drawn. "The reserve officers of the future will come from the R.O.T.C. and C.M.T.C." The Annual Report of the Secretary of War for 1929 tells us: "This important element of our national defense continues to supply the life blood for the Organized Reserves, furnishing, as it does, approximately 5,000 young officers each year." YOU WILL FIGHT THE WAR. THE DANGER OF WAR IS YOUR DANGER. You cannot ignore it.

Students of science and technology, your part in a war was clearly revealed in the events of 1917. Scientists and engineers then became adjuncts of the army and figured out methods for bigger and bitter destruction. Massachusetts Institute of Technology led with the establishment of a Chemical Warfare unit and with instruction in the use of poison gas. Will these events repeat themselves? You who seek to devote your lives to the conquest of nature, will you become took for the conquest of men? You too cannot ignore the question.

Students of the Humanities, concerned with the progress of human thought and behavior: In 1917 all your aims were destroyed and your achievements defiled. The country was swept by a wave of hysteria deliberately provoked by the imperialists and their press. Culture that was not stifled under the weight of military propaganda appeared in hideous caricature as a part of that propaganda. Men trusted as intellectual leaders of the nation betrayed that trust. Even the schools became instruments of incitement to hatred and war, manipulated by the "Committee on Public Information." From the Annual Report of the Educational Director of the National Security League (August 1917-18) we learn that "an appeal was sent asking colleges and universities to release professors on full salary for the work of the Campaign of Patriotism through Education. In response to the invitation, the presidents of ten universities beginning with Columbia, Harvard. Williams, Johns Hopkins, also Michigan Princeton, Colorado, and Stanford, at once intimated a willingness to release the best qualified professors who could be spared from their academic work." These representatives were sent into various sections of the country with the understanding that they should "push propaganda for interpreting the meaning of the war in every possible way, in co-operation with public officials, educators, newspapers, churches, universities, granges, labor organizations, and other available agencies." Can you permit a recurrence of these shameful acts of intellectual prostitution? How will you safeguard your progressive aims and achievements? Where will you stand when a new war threatens to engulf us all? The question confronts you as well as those who will handle the guns of the next war.

THE QUESTION IS OF IMPORTANCE TO ALL STUDENTS IN EVERY PART OF THE COUNTRY. WE CANNOT IGNORE IT.

But some of you may ask, "why bring that up now? Will not the peace pacts prevent them? General Hanson E. Ely, Commandant of the 2nd Corps Area, has given the answer: "We all know there will be a next war, despite talk of peace pacts.... We can get around these disarmament pacts"

Even now there are wars raging on both sides of the Pacific. In Manchuria, Japanese soldiers are fighting Chinese peasants, and are provoking Soviet Russia on the Siberian border. Late September headlines in the "Hew York Sun" announced: "Japan Speeds Plans For War--Foreign Military Attaches Tell of Reports--Some Scent Soviet Clash--Army and Navy Supplies Being Bought in America." In South America, students and workers are killing one another to decide whether British or American companies shall control the oil deposits of the Chaco region. The United States is involved in both disputes and has its entire navy in the Pacific Ocean, ready for action. THE DANGER OF WAR IS IMMEDIATE, AND THREATENS EVERY COUNTRY IN THE WORLD.

OUR QUESTION THEREFORE REQUIRES AN ANSWER NOW! All students should join in that answer at THE STUDENT CONGRESS AGAINST WAR. Immediate steps must be taken to formulate a program of effective opposition to war.

The Student Congress Against War will be held at the University of Chicago during the last week of December. Send delegates from your campus clubs, your publications and your fraternities. The Congress will unite students of every race, creed and political inclination in an effective struggle against war.

The Students Must Answer! Act Now!