Lew Kan, a prominent merchant who ran canneries and a store, walks through Chinatown with his two sons. The boys' formal clothing indicates their high status. All boys and many girls attended segregated public schools in Chinatown. (One merchant father unsuccessfully challenged segregated public schools for his children in 1903.) When they were not in school, Chinatown's youth played in the street, where they were looked after by "uncles." "Uncle" was the nickname for the many caring bachelors of Chinatown who showered children with gifts, attention and love, even if they were not biologically related. Chinese-American children recall growing up in tight-knit and safe communities, which stands in contrast to the reports of Protestant missionaries, who publicly worried about the "unsupervised" youth of Chinatown. 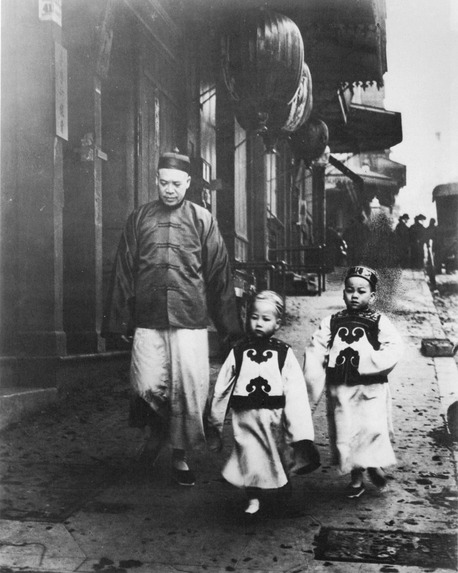 Merchants largely came from the wealthiest provinces in China. Storekeepers had to be savvy in both American and Chinese business practices. Merchants were exempted from the Exclusion Act but could not become citizens, and had to prove their status in order to leave and re-enter the US, and to bring their families. Some merchants also served as labor brokers. Business elites wielded social and political control over Chinatown.