As historian John Kuo Wei Tchen notes of this portrait, "the girl's tattered clothing and gloves on both hands clearly indicate that she works hard, probably assisting her father in carrying the wicker shrimp baskets shown behind."  Tchen speculates that the photograph was taken in a camp of Chinese shrimpers and fishermen near Chinatown, not in San Francisco.  Dried shrimp and fish would then be sold to the Chinese community in San Francisco's "Fish Alley" or shipped back to Hong Kong. 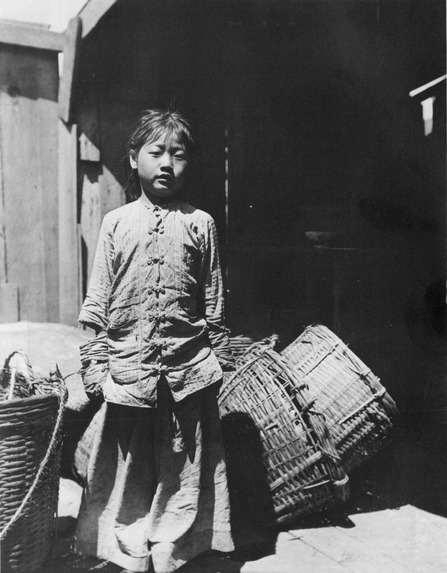 Families were less common in Chinatown because the exclusion of most women and anti-miscegenation laws made it hard for men to find partners. Children born in the US were exempt from the Exclusion Act but still could not become citizens. Because of segregation, Chinese-American children attended Chinese-only schools.