Early in the Civil War, on November 7, 1861, a fleet of Union gunboats bombarded the Sea Islands off the coast of South Carolina. Confederate planters left hastily, ordering their field hands and house servants to accompany them. Most ignored their former masters and remained. The Union government eventually appointed northern antislavery reformers to manage the lands abandoned by the planters and to oversee the labor of ex-slaves. These reformers wanted to demonstrate the superiority of free over slave labor in the cultivation of cotton. Most freedpeople, however, did not want to grow cotton or produce for the market, preferring instead to grow corn, potatoes, and other subsistence crops. Henry P. Moore, a native of New Hampshire who traveled to South Carolina during the Civil War, took this 1862 photograph after white planters had already left Edisto island. Though Moore may have staged the people in the photo, the clothing, crops, tools, and wagon in the photograph were all authentic. 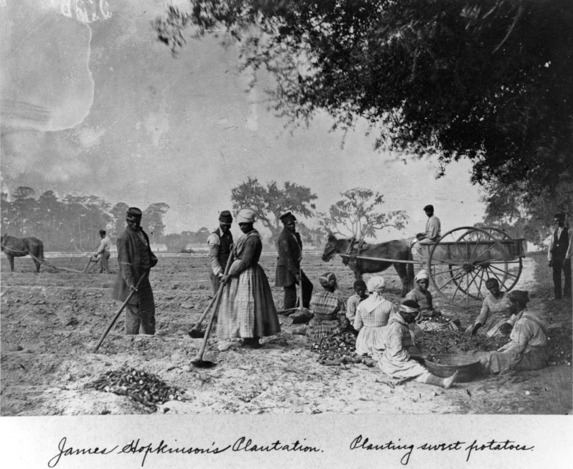 Forty Acres? The Question of Land at the War's End