Jacob Riis is best known for his 1890 work How the Other Half Lives, a journalistic account, replete with Riis's dramatic photographs, of the deplorable conditions of late-nineteenth century urban life. Although Riis, himself a Danish immigrant, was for the most part sympathetic to his subjects, his account nonetheless employed language rife with generalizations and ethnic stereotypes, as well as the kind of moral pronouncements that appealed to his mostly middle-class, reform-minded audience. The photograph and text below were part of a slide show Riis presented to the Washington Convention of Christians at Work, probably in 1894. 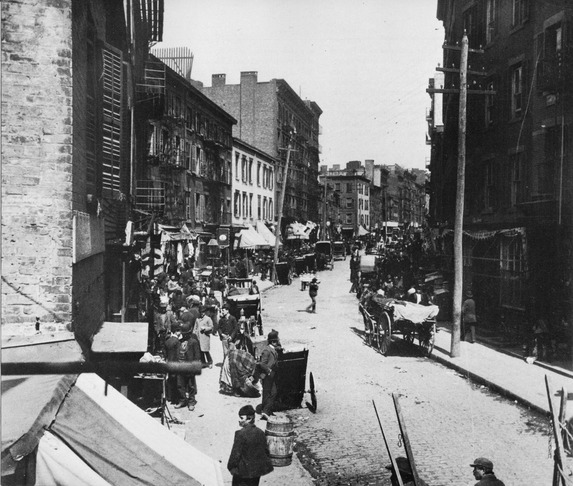 Not very far from that house there is a block that is reputed to be the worse spot in the country, and I should say it might be true from my acquaintance with it. It was decided to tear it down long since, but five years have passed, and the block is there still. We go slowly, very slowly in such matters as that in New York, when there is neither money nor politics in it. Here you are with the Italians. They live out of doors most of the time, and that is why they are healthy though dirty, and the death rate is not so large. Go there at sunset some evening, and you will see an army of men and women slouching along with the unmistakable gait of the tramp. Where they all go will puzzle you. One by one they disappear, even while you look and before your very eyes. You will be troubled to find what becomes of them, till you look sharp and find doorways leading into side alleys.

Source | Jacob Riis, "The Other Half and How They Live; a Story in Pictures," c. 1894, text and photographs; from History Matters: The U.S. Survey Course on the Web, http://historymatters.gmu.edu/mse/Photos/question2.html#!
Creator | Jacob Riis
Item Type | Photograph
Cite This document | Jacob Riis, “"Mulberry Bend",” SHEC: Resources for Teachers, accessed December 5, 2022, https://shec.ashp.cuny.edu/items/show/1037.